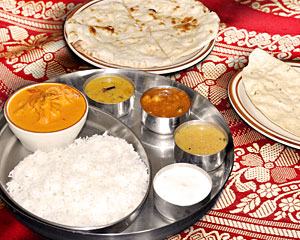 Welcome to Mayuri Indian Cuisine! We offer a range of fine authentic Indian culinary delights through a blend of refinement of the North with the sauce and spices of the South.   We want you to fall in love with our food; that's the Mayuri way. We settle for nothing less than working to provide you the best dining experience. All of our food is prepared from scratch on the premises from homemade spice blends and ingredients. We are happy to prepare your lunch or dinner exactly the way you like. We are open and flexible to create your meal to your liking.

Mayuri specializes in Northern and Southern - which are combinations of different regions to bring unique flavors and aromas to the table. The Northern cuisine most Americans like have been influenced by Mughal, and Northern Indian culture.  Northern cuisine includes Tandoori style cooking which utilizes a cylindrical clay oven which is used for both cooking and baking. Northern cuisine dishes also prepared with rich sauce  spices, herbs to get  good flavor and taste. Four states comprise the cuisines of South India: Tamil Nadu, Andhra Pradesh,  Karnataka and Kerala. Rice and legumes play an important role in South Indian cuisine. Lentils are also used extensively, either accompanying rice preparations, or in the form of independent dishes. Vegetables and dairy products are essential accompaniments, and tamarind  is the favored souring agent. Favorite South Indian cuisine dishes include DOSA, IDLE and VADA of various flavors served with spicy sauces. Chef Krishna R. Chattu has been an Indian food Chef for over 30 years. He learned the traditional recipes over his long career.  Chef Krishna likes to tell people that he worked very hard to reach this level.  In India he began as a cook's helper and progressed to Chef's Assistant and then Chef. Upon coming to the United States he used his vast knowledge of the traditional foods of India to create varied and delicious menus.   In 2004 Chef Krishna took over Mayuri Restaurant as the Executive Chef and co-owns Mayuri Restaurant with Srinivasa reddy Malireddy. He now directs all operations.

We are conveniently located near the intersection of Kirby Parkway and Quince Road, just off Bill Morris Parkway in the Kirby Gate Shopping Center.

Click on the images below for a look at some of our favorite selections.